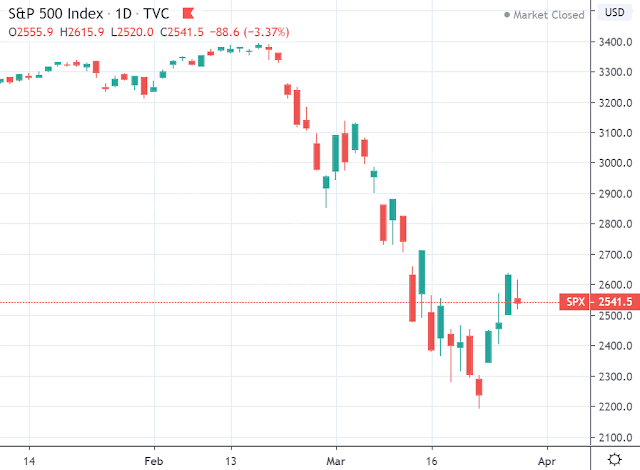 30/3/2020.  As we enter a new trading week today, markets will be reflecting the epic battle between facts and sentiment.


In the Green Corner - Sentiment

Last week, the S&P 500 index rebounded vigorously, on the back of optimism over president Trump’s fiscal stimulus of $2 trillion. As I mentioned a while ago, the Federal Reserve doesn’t have enough tools in its monetary kitbag, and the US government needed to ‘open up its fiscal first aid box’.

But first-aid isn’t the same thing as recovery, and whilst it is right to be optimistic about the long term prospects of the global economy, once COVID-19 has been dealt with, we will see in the coming days whether last week’s surge is revealed as a dead cat bounce.


In the Red Corner - Facts


1. Flash Composite PMI’s are awful for US, UK, Europe and Japan.

As we know, waiting two quarters to see if we have been in recession is a rear-view mirror approach. To make good investment decisions we need information about the right-here, right-now. PMI’s are in the top tier of such data.

Purchasing Managers’ Index data are derived from surveys of senior executives at private sector companies. The dataset provides insights into a wide variety of measures such as GDP, inflation, exports, capacity utilization, employment and inventories. The ‘headline’ PMI is an indicator of the overall health of the economy. 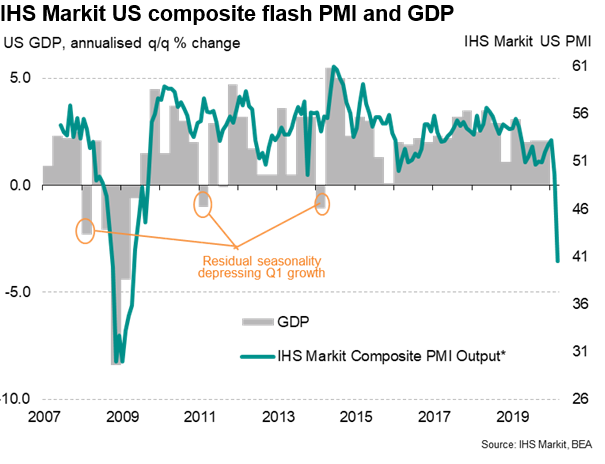 Last week’s data showed a massive 3 million new unemployment claimants in the US, taking the total to 3.28.  There’s more to come.  Some back-of-an-envelope calculations published by the Federal Reserve Bank of St Louis suggest that unemployment in the US could rise to 32%, up from 3.5% in February.

This is huge, because the US economy is quite introspective (for want of a better word). Germany’s exports account for 47% of GDP. For the UK, that figure is 30%. For China, it’s 19%. For USA, just 12% of GDP is derived from exports. The USA is it’s own bubble of economic activity, and it’s home-grown GDP is driven by domestic consumption.  What do we think will happen when people are losing their jobs by the millions?

So What do the “Experts” Say?

Every big fight has it's big-name commentators. Last week, Kristalina Georgieva, Managing Director of the IMF, admitted we now face a recession at least as bad as during the global financial crisis or worse. The IMF expects recovery in 2021. But: To get there, it is paramount to prioritize containment and strengthen health systems—everywhere. The economic impact is and will be severe, but the faster the virus stops, the quicker and stronger the recovery will be.