6/5/2018.  Note that pension figures increase each year, and details can change without notice.


I live outside the UK - should I make voluntary National Insurance contributions? 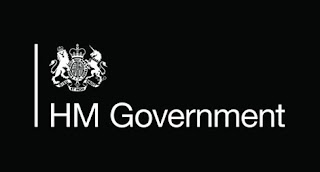 The decision on whether to make voluntary NI contributions depends on your own specific circumstances.


First a quick reminder. National Insurance (NI) contributions go principally to fund the National Health Service (NHS), the state pension, unemployment benefits, and sickness and disability allowances. Anyone employed in the UK will have an NI number, and make NI contributions via PAYE (pay-as-you-earn) deduction from salary. These are known as Class 1 NI contributions (NICs).

If you’re self-employed in the UK, you pay Class 2 NICs at a flat weekly rate, and annually Class 4 NICs based on taxable profits.

If you are working abroad for up to two years and for a UK-based employer, you will likely be required to continue paying Class 1 NICs.

Class 2 is cheaper, and has some additional benefits over Class 3, but more strict on requirements, including being ‘ordinarily’ employed immediately before leaving the UK.  Both classes have the same effect regarding your state pension.


What age will I be able to collect the UK state pension?

It’s easy to check when you’ll reach state pension age, by using the online calculator on the GOV.UK website. Do note, that the younger you are, the more likely this age will be reviewed upwards at some time in the future!


How much is the UK state pension?

The state pension rules changed significantly in April 2016. The government reduced some of the complexity and introduced a single-tier with a ‘full level’ of £155.59 a week (£8,297 a year).  To qualify for full level state pension, you need 35 years of full NI contributions. Below 35 years of NICs, your pension entitlement is scaled downwards accordingly. But to qualify at all, you need at least 10 years.


What benefits have I built up already?

You can check your personal forecast state pension by using the online service on the GOV.UK website. You’ll need a Government Gateway account (easy to set up in 2 minutes) to verify your identity, and for enhanced security the system uses 2FA (two factor authentication) via an app that you download to your mobile phone, which involves scanning a code on your computer screen. It might sound complicated, but it’s very straightforward. Here's what an example state pension summary looks like: 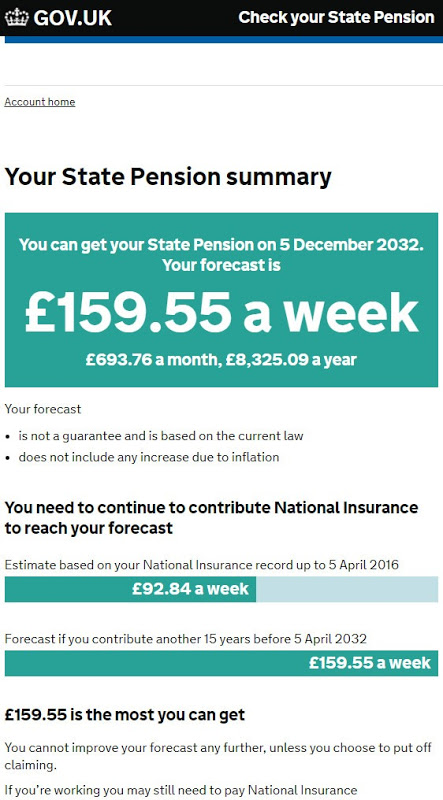 It’s also possible to check your NI payment records for every year. Here is an example for a typical long-term expat who’s decided not to keep up NICs:

For UK residents, the state pension is increased by the ‘triple lock’, meaning payments rise each year by the highest of earnings, inflation or 2.5%. The mechanism has ensured pensioners' income keeps pace with the rising cost of living.

However, the current government has signalled their intention to remove the 2.5% peg, meaning the increase will be ‘double lock’ of the highest of earning or inflation.

If you live abroad when retired, you can still claim your state pension. But, there is an important issue to be aware of: a non-UK resident’s state pension will not increase annually, except if living in the EU (as agreed this week in the Brexit negotiations), the EEA, or some other countries that have reciprocal arrangements with the UK.

Here is a list (not full) of various countries and whether your UK state pension will be indexed if you retire there. 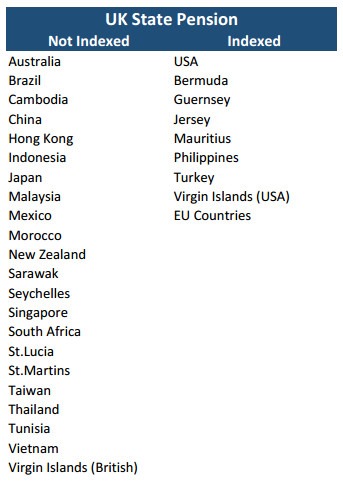 To many (including me), it seems immoral that retired UK citizens, who have made decades of NI contributions, may be penalised because of where they choose to live in retirement. Perversely, the longer we live in retirement, the greater the impact of no indexation, as over time inflation will greatly erode the value of a frozen state pension.


Do I pay tax on my UK state pension?

If you live abroad, but are classed as resident in the UK for tax purposes, you may have to pay UK tax on your state pension, depending on your income.

Even if you are tax resident abroad, you will still be liable for UK tax on your UK income. Overseas retirees with UK income such as state pension, personal pension, rental income, etc., will therefore generally have a UK tax liability on this income.

Depending on your choice of retirement location, you might be taxed also by the country you are living in. However, if the country has a double taxation agreement (DTA) with the UK, you should be able to avoid paying tax twice, and will pay it in only one jurisdiction, depending on the terms of the DTA.

The first step is to login to the government site to see what entitlements you have already earned, what is your record of payment, and how many more qualifying years you would need if you wanted the ‘full’ pension.

Deciding whether to make voluntary NI contributions when living abroad depends substantially on your individual situation. For example:


A 44-page ‘leaflet’(!) that provides more detail, and includes an application form to pay voluntary NICs, is here.