Home » Bonds and Fixed Income , Investment Strategy , Must Read » How Bonds Changed The World (And How They’ll Shape Your Financial Future)

30/5/2015.  Your investor risk rating determines the split between bonds and equities in your portfolio. Read this article to find out why.

In the late 17th century, naval battles were rarely decisive, with victory depending more on weight of numbers than on strategy. In 1694 England (together with its main ally the Netherlands) was at war with France, and had already lost numerous ships in battle with the larger French navy. King William III of England had no option but to massively increase the size and power of the English navy, but there were no finances available. The Bank of England was therefore created as a private institution to supply money to the monarchy and government. The Bank raised 1.2 million pounds of debt in twelve days - the first bond issue ever of any national government.

In 1688 the English fleet had started the war with 173 rated vessels, but ended it with 323. English sea power helped block Louis XIV’s ambitions and peace was negotiated in 1697. English naval dominance continued for two centuries and was fundamental to the global growth of the British Empire.

Get a copy of the original print article - Download

When a government wants to borrow money, a common way is to sell bonds to the public. Bonds are sold with a face value, for instance $1000, which is also the sum that is returned to the bond holder at maturity (which can be anything up to thirty years). During the lifetime of the bond, the government pays interest at the ‘coupon’ rate. A country with strong finances will issue bonds with a low coupon rate, reflecting the relative security of the investment.

Once issued, bonds can be traded and the price will vary daily dependent on factors such as inflation, interest rate and currency movements, and the issuer’s credit rating. Bonds are also known as ‘fixed income’ investments; because the coupon rate is fixed, a lower bond price implies a higher yield.

If you hear on the news that a country’s bond yields have gone up, it is usually an indication that the market has a more negative view on the creditworthiness of the issuer, and prices have gone down.

Corporations can also issue bonds, it’s a way to raise capital without diluting shareholders equity. Just like the mortgage on your home, when a company takes on debt it leverages investors funds and increases return on equity. But highly indebted companies may have a poorer credit profile.

Financially strong companies can issue bonds with a low coupon rate, whereas companies with a poor credit rating will need to offer a higher yield to entice investors.

As an investment, bonds behave differently to equity; the low correlation between the two asset classes creates diversification in a portfolio. In general, bonds are considered the safe and steady part of our holdings. A young person saving for retirement might assign a relatively small allocation to bonds, whereas an investor with a shorter time horizon or a risk-averse attitude should hold proportionally more bonds to protect against a market downturn.

For the investor, bonds are like a reserve of cash in your back pocket. We all know that when there’s an equity market fall, that’s the right time to go shopping - when there’s a ‘sale’ in the stock-market. But if all our investments were equities in the first place, there’s not much we can do. If however we have been holding a fair percentage in bonds, now is the time to reach into the back pocket, pull out some cash, and apply it to equities. This explains why even an adventurous portfolio can benefit from holding some bond assets - keeping some powder dry for when opportunities arise.

Similarly, if some of our equity holdings have performed inexplicably well (for instance, at time of writing a popular fund Fidelity China Focus SGD has grown 55% in the last 12 months), we might consider taking some profits from such a volatile investment and banking them in the safety of our bond holdings.

The discipline of periodically resetting our equity/bond ratio is called rebalancing; it forces us to buy low and sell high, in contrast to an emotionally driven strategy which often is exactly the reverse.

By varying the target equity/bond ratio we affect the volatility of our portfolio, as illustrated in Figures 1 & 2. The six portfolios ‘A’ to ‘F’ each comprise different ratios of two Singapore authorised unit trusts - Franklin US Opportunities Fund USD (north american equity) and Franklin US Low Duration Bond Fund USD (investment grade bond).

In the financial industry we conceptualise risk as volatility, but to the average investor risk has a more emotive definition - it’s the likelihood of our money not being there on the day we want to take it out. Table 2 illustrates in simple percentage terms the fall and rise of each of the six portfolios, going into the global financial crisis of 2008 and then coming out of it. 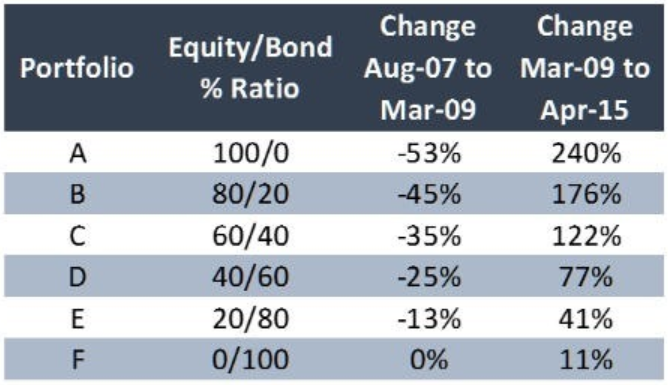 This underlines the importance for each of us to know his or her individual ‘risk profile’ as an investor. Of course I seek growth, but I need to be able to sleep at night comfortable with the risk inherent in my investment strategy.

Diversification Within Your Bond Portfolio

Within the bond part of our portfolio, we can seek another level of diversification, because not all bond funds are same. Major bond classes include:

Some bond funds pay a regular income to the investor, and those funds will have the tag ‘Dis’ or ‘Inc’ in the name, shorthand for Distributing or Income funds. Funds that don’t pay income are usually tagged ‘Acc’, shorthand for Accumulation. All the performances for funds in this article are based on total return, meaning that if income is paid then it is considered to be reinvested.

To summarise, perhaps the most important decision made with any portfolio is the percentage allocation to the bond asset class, and that will depend fundamentally on the investor’s risk profile and time horizon.

Within the bond segment, diversification is still key and global market factors will additionally have an impact on what bond classes are selected. Disciplined rebalancing helps counter emotional mistakes that investors make, and automates the process of buying when specific asset class prices are relatively low and selling when they are relatively high.